Cosmic collision between the Milky Way and a nearby dwarf galaxy more than 5 billion years ago triggered the solar system’s formation, say scientists

Life on Earth can be traced back to the Milky Way crashing into a nearby dwarf galaxy more than five billion years ago, according to new research.

The birth of the Sun is due to a close encounter with smaller loop-shaped companion galaxy called Sagittarius, say Spanish scientists.

Analysis of the age of nearby stars indicates that they formed in bursts shortly after a close approach of Sagittarius on at least three separate occasions.

Ripples caused by the cosmic collision set off a chain of events, one of which led to the formation of our Sun around 4.7 billion years ago.

The finding is based on observations by the European Space Agency’s Gaia satellite launched in December 2013 to create a 3D map of the Milky Way. 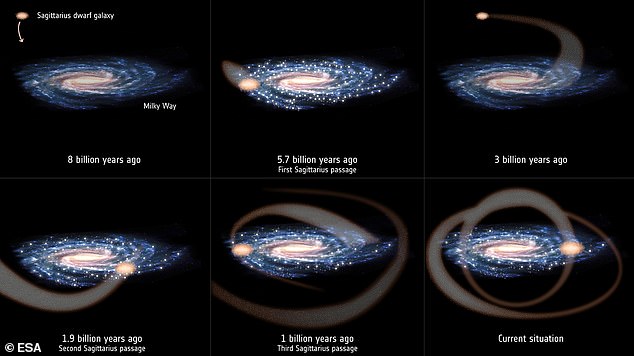 An illustration of the subsequent passages of the Sagittarius dwarf galaxy as it orbits our Milky Way galaxy, and its impact on the Milky Way’s star formation activity, as inferred based on data from ESA’s star-mapping mission, Gaia

The researchers looked at luminosities, distances and colours of stars within a sphere of about 6,500 light years around the Sun and compared the data with existing stellar evolution models.

Sagittarius consists of four globular clusters that measure some 10,000 light-years in diameter, comparing the more than 100,000 light year diameter that makes up the Milky Way.

Despite the mammoth size difference, the notion that the dwarf galaxy may have had such an effect makes sense, according to Tomás.

‘At the beginning you have a galaxy, the Milky Way, which is relatively quiet,’ he said. 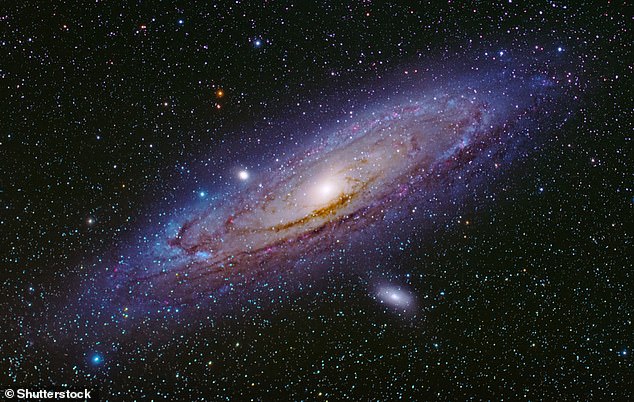 The Milky Way has been producing stars at a constant rate for the second half of its lifetime, but they identified three bursts of enhanced star-forming activity that occurred 5.9, 1.9 and 1 billion years ago

‘After an initial violent epoch of star formation, partly triggered by an earlier merger as we described in a previous study, the Milky Way had reached a balanced state in which stars were forming steadily.

‘Suddenly, you have Sagittarius fall in and disrupt the equilibrium, causing all the previously still gas and dust inside the larger galaxy to slosh around like ripples on the water.’

In some areas of the Milky Way, these ripples would lead to higher concentrations of dust and gas, while emptying others.

The high density of material in those areas would then trigger the formation of new stars, such as our Sun.

‘It seems not only did Sagittarius shape the structure and influenced the dynamics of how stars are moving in the Milky Way, it has also led to a build-up of the Milky Way,’ said co-author Dr Carme Gallart, also at the IAC.

‘It seems that an important part of the Milky Way’s stellar mass was formed due to the interactions with Sagittarius and wouldn’t exist otherwise.’

The Sun and its planets would not exist but for Sagittarius getting trapped by the gravitational pull of the Milky Way and smashing through its disc, Dr Gallart thinks.

‘The Sun formed at the time when stars were forming in the Milky Way because of the first passage of Sagittarius,’ she said. 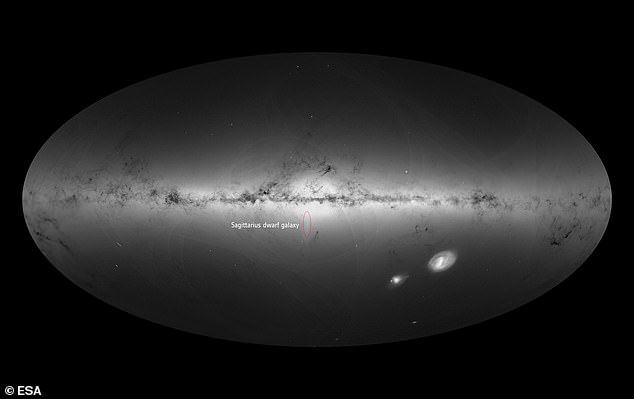 ‘We don’t know if the particular cloud of gas and dust that turned into the Sun collapsed because of the effects of Sagittarius or not.

‘But it is a possible scenario because the age of the Sun is consistent with a star formed as a result of the Sagittarius effect.’

Every collision stripped Sagittarius, which was only discovered in 1994, of some of its gas and dust, leaving the galaxy smaller after each passage.

Existing data suggest Sagittarius might have passed through the Milky Way again quite recently, in the last few hundred million years, and is currently very close to it.

Astronomers think Sagittarius will gradually be completely absorbed by the Milky Way – a process which is already underway.

Gaia has already helped scientists discover other major collisions between the Milky Way and neighbouring galaxies over its long history.

About 8 to 11 billion years ago another galaxy collided with the Milky Way and ‘puffed up the thick disc, filling it with stars’.

It also encountered a ghost galaxy that left ripples in its hydrogen.

The latest findings were published in Nature Astronomy.