Peterborough has the most houses with solar panels on the roof of any city or town in the UK, a study has revealed.

The Cambridgeshire city has more than 9,000 solar panel installations, enough to equip 11.1 per cent of the local authority’s 82,000 households.

Analysis of 371 local authorities across England, Scotland and Wales also saw that London has very few solar panels compared to the number of households.

Nineteen of the 20 worst local authorities for solar panels per household are in London.

Kensington and Chelsea has the lowest percentage of households with solar panels in the country, at a lowly 0.16 per cent.

Of the purported 5,245 households in the City of London district, only 15 households are fitted with solar panels. 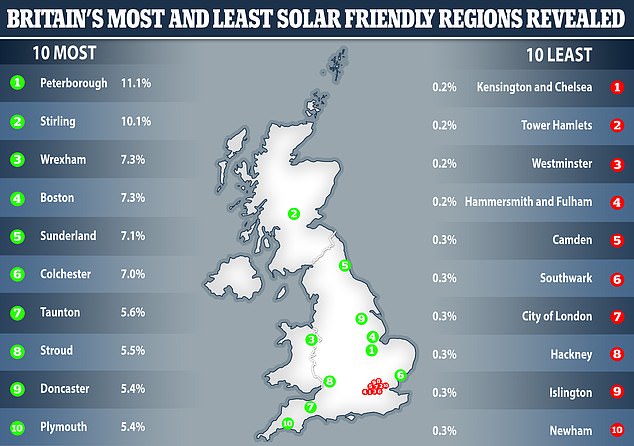 Analysis of 371 local authorities across England, Scotland and Wales also saw that London has very few solar panels compared to the amount of households. Behind Peterborough, the Scottish city of Stirling and the Welsh town of Wrexham make up the top three, with 10.1 and 7.3 per cent respectively

Eco-developer Project Etopia collated and analysed the data on number of solar panels across the UK.

It cross-referenced the number of solar panel installations with the reported number of households in each local authority across Britain.

According to the research, just 2.96 per cent of households across the British nations have solar panels, on average.

Lincoln, Canterbury and Dover all sit around the national average.

Behind Peterborough, the Scottish city of Stirling and the Welsh town of Wrexham make up the top three, with 10.1 and 7.3 per cent respectively.

The top ten is rounded out by Boston, Sunderland, Colchester, Taunton, Stroud, Doncaster and Plymouth.

Britain’s lockdown during the coronavirus pandemic saw the country use 20 per cent less energy.

As a result, Great Britain set a new record for how long the country has gone without using a single watt of energy produced from coal.

The drop in demand as millions of Britons stay indoors coincided with a fortnight of good weather, seeing energy consumption drop dramatically.

When the country broke the record, it marked more than 438 hours and 10 minutes since the last coal generator came off the system at midnight on Thursday, April 9. 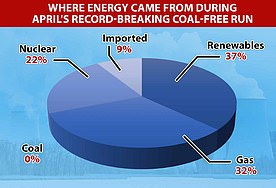 Last month, the UK broke the record for how long the nation went without producing a single watt of energy from coal. Thirty-seven per cent of the UK’s energy came from renewable sources  (pictured)

At the other end of the spectrum, the bottom ten were all London boroughs.

As well as Kensington and Chelsea, Tower Hamlets, Hammersmith and Fulham and Westminster all record a lowly figure below 0.3 per cent.

The only local authority to breach the London monopoly on the entire bottom 20 is the highly isolated Shetland Islands, which comes in at 19th worst.

Joseph Daniels, CEO of Project Etopia, said: ‘Britain has never been greener and these towns and cities are trailblazers who we should all look to for inspiration.

‘However, in the best performing town, Peterborough, more than 88 per cent of households still lack solar, so there is plenty more to be done.

‘Policymakers and suppliers need to examine why so many areas have particularly weak levels of solar installations while others sprint way ahead.

‘The UK might not be the sunniest place on Earth, but the technology has improved enough over the past 20 years for it to be worthwhile anywhere in the country.’

The UK is using more and more renewable sources of electricity and increasingly moving away from fossil fuels.

Last month, the UK broke the record for how long the nation went without producing a single watt of energy from coal.

Installing solar panels is better for the environment and also saves the consumer money.

Mr Daniels told MailOnline: ‘A typical 4killowatt peak system can help people save as much as £260 a year off their energy bill.

‘This amount can vary around the country depending on the number of daylight hours, whether the roof is in shade for part of the day, and what way the roof faces.

‘A south facing roof is ideal, but roofs facing south-west can still provide a benefit.

‘A typical home solar photovoltaic system could save around 1.3 to 1.6 tonnes of carbon per year.’

WHAT IS SOLAR POWER?

Solar power is the conversion of energy from sunlight into electricity.

Photovoltaics — the kind of solar panel you might see built into a calculator — are capable of directly converting light into electrical power.

In concentrated solar power systems, however, mirrors or lenses are first used to collect the sunlight that falls on a large area and focus it — creating heat that can be used to drive a steam turbine and generate electricity.

Optimum locations for solar farms include the arid tropics and subtropics, with deserts lying at such low latitudes often being cloudless and getting around 10 hours of sunlight each day.

According to NASA, the eastern part of the Sahara — the Libyan Desert — is the sunniest place on the Earth.

Solar power accounted for 1.7 per cent of the world’s electricity production in 2017, and has been growing at a rate of 35 per cent each year.