Pair of antibodies that BLOCK coronavirus from infecting human cells could be used to develop an effective vaccine, scientists claim

The distinct antibodies are called H4 and B38 and prevent SARS-CoV-2, the virus which causes COVID-19, from latching on to uninfected cells.

In preliminary trials on mice, the amount of virus inside infected lungs was reduced by up to a third after just three days and the rodents suffered less damage to their respiratory system.

The antibodies were discovered in the blood of a recovered patient and block the pathogen from binding to the ACE2 receptor on the surface of many human cells.

Previous studies have found ACE2 — an enzyme which sticks out from the surface of our cells and creates small proteins which help regulate blood pressure, wound healing and inflammation — acts as an inadvertent gateway for the virus.

Spikes protruding from the surface of SARS-CoV-2 latch onto the ACE2 receptor and  from here it can destroy cells and wreak havoc.

Researchers say the antibodies themselves are a ‘promising treatment’ and could help scientists develop an effective vaccine. 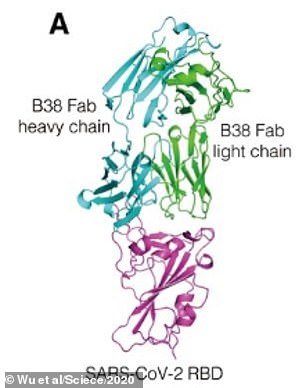 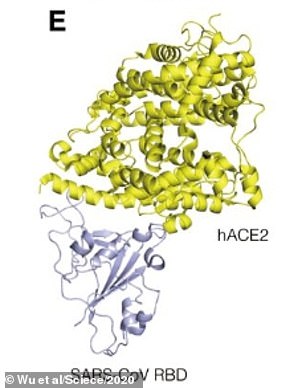 Pictured, a computer generated view of how one of the antibodies – B38 – prevents the virus binding with ACE2 and invading cells. Left, the antibody (green and blue) binds to SARS-CoV-2. It overlaps with where the virus wold bind to ACE2 and gets in the way, stopping it from infecting the cells. Right, what it looks like when the virus (now in purple) latches on to the ACE2 receptor in human cells, which provides a gateway into the human body

Four antibodies were discovered which bind to SARS-CoV-2 and not SARS, B38, H4 as well as B5 and H2 (pictured). Each antibody was then tested to see if it could inhibit the binding of the viral spike with the ACE2 receptor. H2 (far right, blue line) was almost completely ineffective. B5 (second from right) expressed ‘partial competition’ but was not as effective as B38 and H4 (left and second from left, respectively)

H4 and B38 were two of 14 individual antibodies found in the plasma of the recovered COVID-19 patients.

Researchers compared to see if they were effective at binding to SARS-CoV-2, which is causing the current pandemic, and the genetically similar SARS, which caused a pandemic back in 2003.

Four antibodies were discovered which bind to SARS-CoV-2 and not SARS, B38, H4 as well as B5 and H2.

Each antibody was then tested to see if it could inhibit the binding of the coronavirus’s unique spike with the ACE2 receptor.

H2 was almost completely ineffective, proving it does not compete with ACE2 to latch onto the virus.

B5 expressed ‘partial competition’ but was not as effective as B38 and H4.

Next, the Chinese scientists led by Dr Yan Wu from Capital Medical University in Beijing, wanted to investigate if the two antibodies could work in tandem.

They found the two antibodies bind to different parts of the viral spike, which means they can work together to prevent binding with the vulnerable ACE2 receptor.

‘Cocktail B38 and H4 exhibit synergetic neutralising ability, even in the presence of a higher titer (concentration) of virus,’ the researchers write in their study.

They can work together because they target different epitopes — binding sites on an invading pathogen — on the virus’s spike.

When these epitopes are covered by H4 and B38, it is impossible for the virus to bind with ACE2 as the bulky antibodies get in the way.

The scientists found that both the antibodies can surround the virus at the same time, with only minimal overlap. 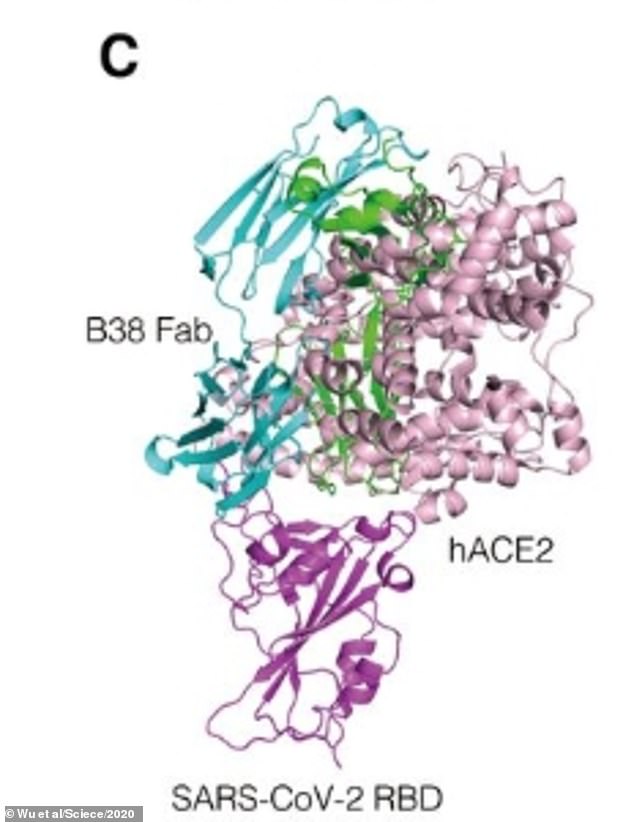 Pictured, a superimposed image created by the team of scientists showing what it looks like with the virus (purple) superimposed against the antibody (blue and green) as well as the ACE2 receptor (pink)

This means both antibodies can be effective at neutralising the virus without significantly hindering the other.

Researchers then tested these antibodies in mice. Mice infected with the virus were given a dose of both antibodies 12 hours later.

After three days, the amount of virus in the lungs of the mice was analysed and compared to a control group.

They found that mice injected with H4 and B38 antibodies had a reduction of 26 and 32.8 per cent in viral load.

Analysis of the lungs revealed the group that was not treated suffered severe respiratory issues.

‘Severe bronchopneumonia and interstitial pneumonia can be observed in the mice of [the] control group, with edema and bronchial epithelia cell desquamation and infiltration of lymphocytes within alveolar spaces,’ the scientists explain.

The researchers say that as COVID-19 continues to spread, understanding the binding sites of the virus will be key in vaccine development.

‘Furthermore, the molecular features of the neutralising antibody targeting epitopes are helpful for the development of small molecule or peptide drugs/inhibitorsm’ they say.

‘The neutralising antibodies themselves are also promising candidates for prophylactic and therapeutic treatment against COVID-19 virus.

The full findings are available in Science.

How ACE2 receptor is targeted by SARS-CoV-2

Dr Krishna Sriram, Professor Paul Insel and Professor Paul Loomba from the University of Claifornia San Diego wrote an article explaining the role of ACE2 in the current coronavirus pandemic.

The article for The Conversation went into detail on how SARS-CoV-2 targets and exploits the innocuous receptor.

ACE2 is an enzyme which sticks out from the surface of our cells and creates small proteins which help regulate blood pressure, wound healing and inflammation.

It does this by cutting up the larger protein angiotensinogen into smaller ones that then go on to regulate functions in the cell.

‘Using the spike-like protein on its surface, the SARS-CoV-2 virus binds to ACE2 – like a key being inserted into a lock – prior to entry and infection of cells,’ the academics write.

‘Hence, ACE2 acts as a cellular doorway – a receptor – for the virus that causes COVID-19.’

The receptor is commonly found on the surface of many human cells, including in the lungs, heart, blood vessels and kidneys.

‘ACE2 is highly abundant on type 2 pneumocytes, an important cell type present in chambers within the lung called alveoli, where oxygen is absorbed and waste carbon dioxide is released.’

ACE2 normally breaks up and modulate the activities of a protein called angiotensin II (ANG II).

If left to its own devices following the incapacitation of ACE2, the protein can cause high blood pressure and inflammation.

Another side effect is the high levels of ANG II can damage and even kill the type 2 pneumocytes in the lung’s alveoli which are essential for gas exchange.