Tobacco companies have been busy developing minty smoking ‘accessories’ to circumvent the UK ban on menthol cigarettes that comes into force on Wednesday, study shows

Tobacco companies have been working on new accessories that bypass the UK’s ban on menthol cigarettes, which comes into force this week, according to a new study.

UK researchers say tobacco companies have used a four-year period to prepare for the ban by developing new products such as menthol filters and ‘flavour cards’ that make regular cigarettes taste minty.

A loophole in the ban means these accessories can be promoted to customers near the cash till in shops in England and Wales after the ban, which takes effect on Wednesday, May 20.

Tobacco companies have created new websites and sponsorships in ways that undermine the intended public health benefit of the ban, the researchers add.

The companies realise the menthol ban will trigger smokers to quit and are therefore attempting to ‘move the smokers onto new tobacco products’, they claim. 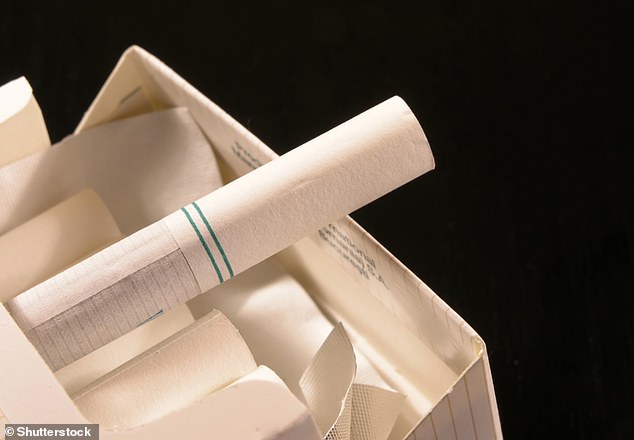 ‘The way tobacco companies are using the ban on menthol cigarettes to promote new menthol tobacco products which are heated rather than burned undermines the very purpose of this ban,’ said Professor Anna Gilmore, Director of the Tobacco Control Research Group (TCRG) at the University of Bath.

‘It also flies in the face of tobacco company claims that they wish to reduce the harm from smoking.

‘They realise the menthol ban will trigger smokers to quit – instead they seek to move the smokers onto new tobacco products which independent evidence indicates are as dangerous as smoking and from which they make even more profit.’

A menthol cigarette ban for the UK was first agreed in 2014 and was originally due to come into force in 2016 – however, intense lobbying put it back four years until this week. 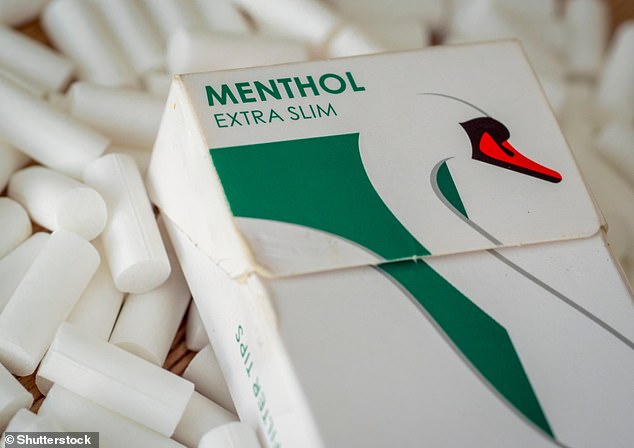 The ban comes from the EU’s new Tobacco Product Directive laws, which prohibit all menthol cigarettes.

The rules will still apply to Britain during the Brexit transition period, as the instruction was implemented in UK law in 2016.

For the new study, TCRG researchers analysed industry analyst data to track menthol market cigarette share from the original legislation agreement in 2016 through to 2018.

In the four-year phasing in period, tobacco firms have not only continued to sell and promote menthol products, but worked on new ways to push smokers towards menthol products that circumvent the ban, TCRG claims.

These include menthol filters and flavour cards that smokers can add to cigarette packs, as well as ‘roll-your-own’ tobacco pouches, to make them minty.

A menthol flavour can be added to cigarettes during the manufacturing process or smokers can add it themselves by crushing a menthol capsule.

Independent roll-your-own and make-your-own accessories specialist, The Republic Group, based in the US, also introduced a new menthol filter through its Swan brand.

A recent innovation for adding mint flavour is the addition of a capsule, or ‘crushball’ – a small plastic capsule in the filter activated by crushing. 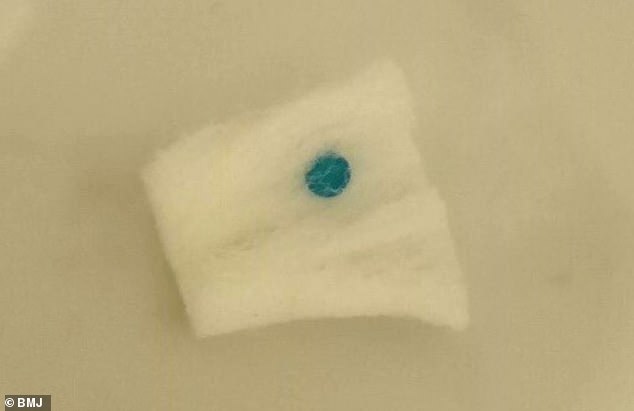 Image shows a menthol capsule located inside a filter. A menthol flavour can be added to cigarettes during the manufacturing process or smokers can add it themselves by crushing a menthol capsule

These crushballs first appeared on the market in Japan in 2007 and are popular among young people ‘due to the flavour and interactivity’, the researchers say in their study in BMJ’s Tobacco Control.

These website push consumers to switch to other products instead of quitting and promote new heated products such as IQOS, which heats menthol-flavoured tobacco rather than burning it.

Although cigarillos currently have a small market share of UK tobacco sales, this share will grow partly because they are subject to lower taxes than cigarettes and are mostly exempt from plain packaging legislation.

‘Our findings suggest the tobacco industry was driving sales of menthol cigarettes right up to the ban – a product whose serious health implications had led to the ban in the first place,’ said lead author Dr Rosemary Hiscock, also at TCRG.

‘We recommend loopholes in legislation be closed as soon as possible to prevent tobacco companies undermining the intended public health impacts of the legislation.

One in six menthol smokers said they will quit after the menthol ban, which could reduce overall UK cigarette sales by 3 per cent, TCRG said.

The ban will be help reduce deaths and illness caused by cigarette smoking, such as strokes, cancer and lung disease.

But the addition of menthol to cigarettes takes away some of the harsh sensations of smoking and can make them more appealing to young people.

‘Research shows that menthol in cigarettes makes it easier for children to try smoking and to go on to become addicted smokers,’ said public health charity Action on Smoking and Health’s chief executive, Deborah Arnott.

‘Getting rid of menthol cigarettes will reduce the likelihood of young people taking up smoking, and make it easier for smokers to quit.

‘It’s disgraceful that Imperial Tobacco is trying to undermine the ban by selling cards which infuse menthol into cigarettes.’

The tobacco industry’s exploitation of the menthol ban mirrors the introduction of plain and standardised packaging in 2016, TCRG said.

Tobacco companies misused the phase-in period to find was to circumvent legalisation and shore up profits at the expense of public health, they claim.

THE NEW LAWS ON MENTHOL CIGARETTES

No person may produce or supply a cigarette or hand rolling tobacco with:

‘(a) a filter, paper, package, capsule or other component containing flavourings;

‘(b) a filter, paper or capsule containing tobacco or nicotine; or

‘(c) a technical feature allowing the consumer to modify the smell, taste, or smoke intensity of the product.’

THE HISTORY OF MENTHOL CIGARETTES

Menthol was first added to cigarettes in the 1920s.

It was previously marketed as being healthier, cooler and more refreshing than unflavoured tobacco.

They were targeted towards ‘beginner’ smokers and smokers with health concerns.

Many smokers think menthol cigarettes are safer, but they are not.